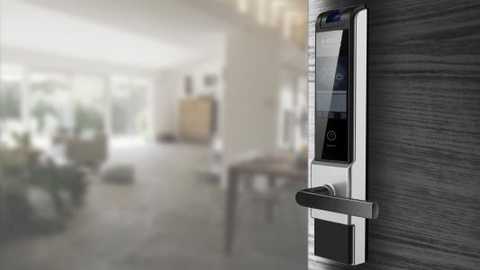 Mr. Mu Xin wrote in a poem "Slow in the past": "The locks in the past are also beautiful, the keys are beautiful, you lock, and people will understand." But with the emergence of various unlocking techniques and people often forget With the habit of a key, the traditional door lock can no longer meet people's safety and convenience needs. Therefore, as the basic needs of people's daily life, "lock" is constantly updated with the development of the times. From the earliest wooden latch doors, to the later iron gates, to the security door hubs, the help of technology now ushers us the era of smart door locks!

In the minds of consumers, locks are a symbol of the family's private safe space. However, traditional door locks have two obvious pain points that restrict the development of the industry.

The first is security. As the saying goes, "The lock can only prevent the gentleman from being able to prevent the villain." In the face of "black technology" unlocking methods such as card type, paper clip type, door handle removal, and cat eye opening, any traditional door lock will only be displayed.

Second is convenience. Many people have the trouble of losing their keys. There are also quite a few people who don't like to carry keys. The separation of keys and locks has become a major cause of people's lives.

The rise of smart door locks completely solved the two major pain points of safety and convenience. At present, smart locks on the market basically use biometric-based recognition methods such as fingerprint recognition and face recognition to connect locks to people and the network. The uniqueness, non-replicability, ease of operation and full intelligence of the information not only ensure the safety of people's living space, but also satisfy the convenience of unlocking.

Smart door locks are vast, and the era of screaming is coming

Smart door locks have risen from 2015 and soared in 2017. So far, there have not been strong brands and industry oligarchs. It can be said that smart door locks are still in the stage of brand competition and breakout.

According to the data of the National Lock Industry Information Center, the scale of China's smart lock market in 2016 was 3.5 million sets, and it is expected to reach 32 million sets by 2020, nearly 10 times in five years, and the market prospects are blue. At the same time, compared with foreign countries, the penetration rate of China's smart locks is still low. Compared with the 80% penetration rate of the most mature Korean market, the penetration rate in the Chinese market is only 2%. The potential of the Chinese market is also huge!

The unformed industry pattern, increasing market dividends and extremely low market penetration are the development status of smart door locks in the Chinese market. This calls for more companies to enter the blue sea to compete for interests and fight for oligarchs. The current status quo is that the online market far exceeds the offline market. The fierce competition in the online market indicates that Internet companies have become the main force of the plus code smart lock. The representative of this is the many new mobile phone manufacturers.

On April 9 this year, Hammer Technology and Advantage Technology cooperated to launch three consumer upgrade smart locks - E1, C1, C1N, which are priced at 2,699 yuan, 1999 yuan, and 1,599 yuan respectively. According to the person in charge Liu Jiangfeng, the smart lock of the superior technology has the functions of swipe ID card, fingerprint recognition, face recognition and voice control.

Among them, fingerprint recognition is one of the more mainstream unlocking methods on the market. Many traditional manufacturers still use optical fingerprinting and 2D imaging technology, which is easy to be unlocked by means of paper copying fingerprints. The mobile phone manufacturers have brought the technology of capacitive fingerprinting and 3D imaging. In the future, there may be technological innovations such as living body recognition and ultrasound, which brings technological upgrading to the smart door lock industry.

Password unlocking is another mainstream unlocking method. You need to send a temporary password to the user to unlock it. Compared with traditional enterprises that are accustomed to hardware manufacturing door locks, mobile Internet companies that use interactive design for their livelihood not only bring professional support of APP technology in the way of password unlocking, but also provide ideas for ensuring security with virtual passwords. .

The technical gap is an irreparable gap, but traditional manufacturers are not "nothing." There is a saying in the home furnishing industry called â€œthree-point product, seven-point installationâ€. In addition, the door lock has high requirements for timeliness of maintenance. In terms of floor installation and timely maintenance, traditional door lock manufacturers have greater advantages. Therefore, if you want to gain a foothold in the smart door lock industry and continue to grow, the complementary advantages of technology and landing are particularly important!

pvc plastic sheets is most commonly used for plastic moldings where it is injected into a mold while molten, forming complex shapes at relatively low cost and high volume, examples include bottle tops, bottles and fittings. It can be used as blister packaging rigid PVC sheets.

Our pvc sheet with excellent features of impact resistence and chemical resistance,According to customer request,we can produce film which are anti-static,UV resistace,smooth and high impact resistance, Can be used for packaging material of toys, tools and gift, Folding Box.